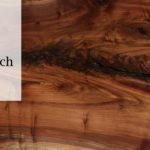 A good crotch wood is perhaps one of the most beautiful works of art by nature.
Crotch wood and veneers are known for their highly decorative character and find application in the furniture making and interior designing industry. Although almost all hardwood trees have crotches, not all crotches are created equal in magnificence. There are some attributes, which are essential to make crotch wood or veneer command superior categorization and value.

Let’s see a few features that make for a good crotch.