Why is Crotch Veneer So Sought After? 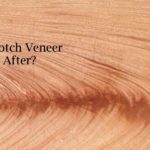 This beautiful “flame” pattern of grain is formed at the fork of the tree. The bigger the branch, the more profound the compression of grain it causes, resulting in a highly figured V-Grain.

Unlike burls, crotches have the same grain as the other wood in the tree yet have stunning patterns to behold.

It is a completely natural process, usually having a wide variety of grain variations. This complete dependence on nature makes it highly prized.
Finding two identical or similar crotch veneers is also an exhaustive process. Matching of grains to create panelling is especially a tough task.

Crotch wood is harder and denser than the other portions of the same tree. The crotch can be labelled as a ’Feather Crotch’, ’Plume’, ‘Burning Bush’ or a ‘Feather Crotch’.

The veneer sheets of crotches are rarely found in larger sizes. Although mahogany and walnut species dominate the field of crotch veneers since their main trees consistently produce large crotch areas. Teak Crotches, Mango Crotches and Neem Crotches are also becoming quite popular.

The highly figured V-grain of an extremely decorative character is mostly put to use in creating exquisite tabletops, panelling, etc. The unusual and unique attributes of every crotch veneer makes it much sought after by the veneer and furniture industry.

For the best variety and grain of Crotch Veneer, you may contact Starwood Veneers, the leading exporter of lumbers and veneers from India.