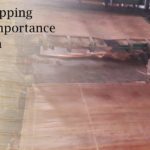 The two types of veneer clippings are of green veneer and dry veneer. When it comes to clipping green veneer, there are six trays from the lathe. Out of these six, three would provide to one clipper and the other three to another clipper. The clippers that are being used nowadays in the modern world have sensors to measure that make clipping easier to a nominal size of 4-feet, 2-feet or any other required width.

Afterwards, the green veneer is sorted on the basis of it’s width or grade in preparation for drying. Flitches of green sliced veneer sometimes may have defects that may need to be trimmed or clipped out before being sent for drying.

The dry veneer clipping is performed a little differently. The veneer is sometimes fed to the dryer when it is upon trays. As soon as the veneer is passed through the dryer it is set to be clipped and it is reported that this procedure results in less waste and split veneer

This is another crucial step to be followed and it has been made easier in the modern day with help from technology. Starwood Veneers and Lumber has the best technology and machines that are proven to be more efficient.